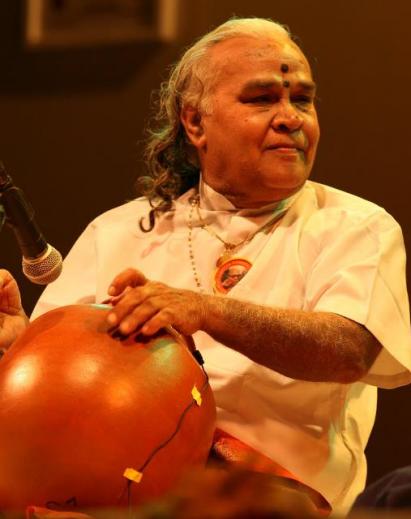 Thetakudi Harihara Vinayakram,also known as Vikku Vinayakram is a Grammy Award–winning Indian percussionist. Vinayakram plays Carnatic music with the ghatam, an earthen pot. Vinayakram is credit for the progress and development as well as popularizing of the ghatam.

Vikku Vinayakram was a child prodigy, with his concert career beginning at the age of 13. The year of birth of the Ghatam Maestro is 1942 & his arangetram was on March 5, 1955, when he was just 13 at the Sri Rama Navami festival – Thoothukudi.While proceeding for the arangetram the tuned ghatam instrument was broken by a child named Ganesh, which by itself had been a good omen for his bright career. where he accompanied V.V.Sadagopan. He established his right to be on the stage by playing with such dexterity that he was soon accompanying many famous vocalists in Carnatic music at the time, including Mangalampalli Balamuralikrishna, G. N. Balasubramaniam, Madurai Mani Iyer, Semmangudi Srinivasa Iyer, M. S. Subbulakshmi and Maharajapuram Santhanam, among others. His brother, T. H. Subhash Chandran, also excelled in the field. The Ghatam followed the master by rising to fame as a percussion instrument that required nimble fingers and strong stomach muscles to control the mouth of the pot.

Vikku’s tryst with the international music platform came in the early 70’s when he joined Shakti to play along with John McLaughlin and Zakir Hussain. The showman that he is, his long hair and nimble fingers had Shakti catapult to fame.

He has also performed at Basant Utsav, the annual fund raiser for the Banyan.

Vikku Vinayakram is Principal of Sri Jaya Ganesh Tala Vadya Vidyalaya in Chennai, India – the academy established by his late father and teacher in 1958. It continues to produce new stars of Carnatic percussion.

The Western bands of which T.H.Vinayakaram was a part found it easy to refer to him as Vikku — a name suggested by MS’s daughter Radha Viswanathan during the 1966 tour of the US when MS sang the memorable & historic concert at the United Nations.

Vikku Vinayakram was conferred the Hafiz Ali Khan Award for “unmatched contribution in the field of music” in 2000. T. H. Vinakayaram is also the first South Indian musician to be awarded the Grammy for Best World Music Album for his participation in Mickey Hart’s Planet Drum in which he played ghatam and morsing. He donated all the proceeds from the award to a charity organization in south India. He was also nominated for the 1996 Grammy Awards for Best World Music Album for his participation in ‘Raga Aberi’ along with L. Shankar on the ten string double violin and Zakir Hussain on the tabla (the piece is set in the tala cycle of 4¾ beats). The Indian Government decorated him with the Padma Shri award.