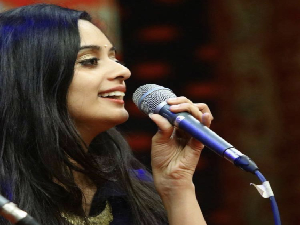 Born in Muscat in 1994, Shruti Kumar was inducted into Carnatic music at the age of 6, in the year 2000, by Smt. Sudha Raghunathan (Muscat) from 2006 to 2011 guided by Bombay Jayashri Ramnath. She is now learning music from Shri. A.S.Murali, senior disciple of Sangeetha Kala Acharya Shri. P.S.Narayanaswami and an “A” grade artiste of AIR in Vocal Music and Ghatam.

To focus on music and media as her career, she did her bachelor’s Degree in Electronic Media and she also has a master’s degree in Music Production, Technology and Innovation from the renowned Berklee College of Music wherein she was fortunate to interact with global musicians and explore the creative side of music.

Shruti Kumar, along with her sister Sahana Kumar, did a research project titled “The Celnatic Experience” highlighting cross-genre influences between Irish Celtic Music and Carnatic Music, which was composed in the 18th century in British India, as part of the Fellowship with Berklee which brought them laurels. Shruti & Sahana have recorded an album of Celnatic Experience collaborating with international musicians and have also scribed a book on the subject.

Shruti Kumar has performed Carnatic music in many stages in South India and also during Chennai December Music Season. She got a wonderful opportunity to perform for the world-renowned musician Yanni in 2014 at Chennai who appreciated her singing. She also performed at the after party of “Boney Em tour of India 2015” and she was appreciated by the entire band including the lead musician Maizee Williams.

She has been featured in Jaya TV, Mega TV, Vijay TV, Aastha TV and Zee tamil. Shruti Kumar has also been included in the archival projects of Navaratri Kritis and Navavarna Kritis by Smt. Bombay Jayashri. She has also recorded an album of hymns for the Lalithambal temple, Tirumeeyachur, in whose sannidhi Lalitha sahasranamam was created. Shruti & Sahana are currently working on several projects and collaborations which they hope to release in the near future.