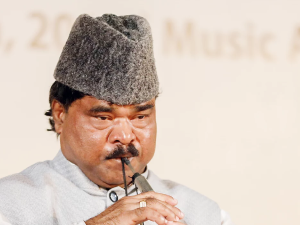 “Shehnai Chakravarthy”, Pandit Dr. S. Ballesh, is an internationally acclaimed Shehnai player and Hindustani Classical vocalist with specialization in Patiala gharana and is trained in Kirana and Gwalior gharanas. In addition, he is also a remarkable ghazal singer. He is one of the well-known disciples of world-renowned Shehnai Maestro Bharat Ratna Ustad Bismillah Khan. Ustad ji blessed Pt. Ballesh as “Dakshina Bharat Bismillah Khan”. He is an “A” grade Hindustani Classical Shehnai Artiste in Akashwani All India Radio and Doordarshan.

Pt. Ballesh belongs to a family of renowned Shehnai players, from M.K. Hubli (Belgaum district), Karnataka, who have been performing for the past 30 decades (300 years). He received training in Shehnai from his father Shehnai Samrat Pt. Sanna Bharamanna Guruji who was a famous Shehnai player and later was trained by his uncle Pt. Dodda Bharamannaji.

Pt. Ballesh is one of the top musicians among Indian music artistes as well as international film scene. He gave a solo Shehnai performance at the All India Music Conference held at Dharwad, in 1975, in the presence of Pt. Bhimsen Joshi, Smt. Gangubhai Hangal and other eminent artistes, which was an outstanding performance leading to a remarkable appreciation and standing ovation from the audience. He has also performed in many jugalbandhi concerts with Hindustani and Carnatic musicians.

Film Music: He has played Shehnai for many Indian composers such as Maestro Naushad Ali, Mellisai Mannar M. S. Viswanathan, Maestro Ilayaraja and Oscar awardee A. R. Rahman in various Indian films. He is also a renowned playback singer and has sung with various eminent playback singers.

The duo Pt. Ballesh and Shri. Krishna Ballesh played Shehnai in the Hollywood movie “The Hundred Foot Journey – 2014” for the track “India Calling”.

Pt. Ballesh played Shehnai in the Bollywood movie “Rockstar” for the track titled “The Dichotomy of fame” and “Bombay” for A.R. Rahman.  Few prominent tracks include “Ye Jo Des Hai Tera” from the movie “Swades”. Pt. Ballesh also played for M.M. Keeravani in the movie Bahubali.

The pathos-romantic Shehnai bits of Ilayaraja’s music such as “Sundari Kannal Oru Sethi” from the movie “Thalapathi”, “Ala Pol Vela Pol” from the movie “Yejaman” starring actor Rajinikanth were played by Pt. Ballesh.

Pt. Ballesh has sung and played Shehnai for more than 7500 background scores and 25,000 film songs and around 35,000 devotional songs. He has also sung Hindustani aalaaps and collaborated with international musicians in their recordings as a Shehnai player. Pt. Ballesh has extensively travelled all over India and abroad.