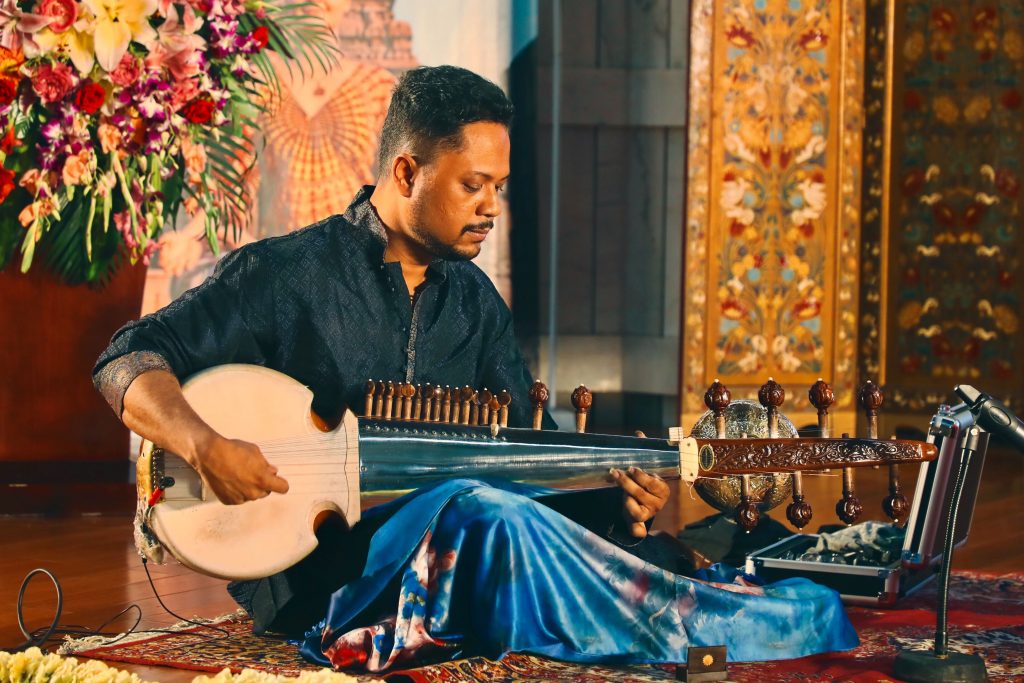 Born into a family with a profound lineage of musicians and artists, Sayak Barua is committed to sharing the Sarode, an Indian instrument belonging to a rich classical tradition that uplifts the soul and spirit. Infusing eastern raga style with western traditions of Blues and Jazz, Sayak’s passages spark with meditative drones and flickering improvisations.

Sayak has consistently ranked high in National classical music competitions for his solo and ensemble work and continues to expand his repertoire. He has eagerly sought to experiment with non-traditional instrumentation, including guitar and electronics, adding unexpected reverberations to his entrancing recitals.

After receiving a master’s in instrumental music at Rabindrabharati University, Sayak was appointed to a prestigious position of Junior Research Fellow for the Sarode by the Indian Ministry of Culture. His passion for education and music has led him to tour extensively throughout India, performing his ragas in diverse and remote regions of the country. In an expansive and heterogeneous country, Sayak’s soothing and meditative drones bridge ethnic and social divides.

Along with being an B high grade artiste for the All India Radio, Sayak was selected as an Onebeat fellow (OneBeatSM is an international cultural exchange that celebrates the transformative power of the arts through the creation of original, inventive music, and people-to-people diplomacy.) to tour the US for a month.

Sayak took part in the 9th International Music Festival 2013 held at Samarkand, Uzbekistan, and he was part of the Grand Prix winning Indian contingent.

Sayak has toured twice to Afghanistan, Kabul, as a teacher and performer along with his wife, Moumita, to teach at the Afghanistan National Institute of Music. Sayak was a resident of Beijing for 3 years teaching, performing and propagating Indian Classical music on behalf of ICCR and as a non-official performer for the Indian Embassy, Beijing.