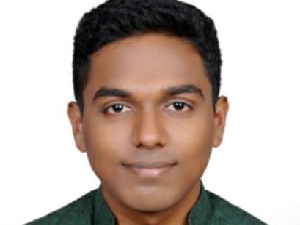 G. Srinath, hailing from TamilNadu, has been learning Carnatic music for more than 10 years. He had continued to take up music as his career after completion of  Diploma and Bachelor’s in Music. He has been learning from various gurus, namely Smt. Sumathi, Smt. V. Jaishri, Dr. P. Uma Maheshwari, Shri. Shivaya Ramalingam, Shri. S. Venkatesan and Shri. Koviladi Madhwa Prasad.

Having known Sanskrit, Hindi, English, Malayalam and Tamil, he has been teaching music to people from different regions, speaking different languages, for more than 4 years. In addition to teaching Carnatic music, he also plays keyboard and piano. He has also won accolades from his participation in many intercollegiate competitions.