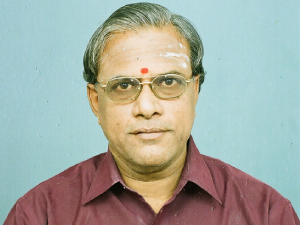 A. S. Krishnan hails from a family of musicians. He had his initial training in mridangam and muhursing under the guidance of his father Late Shri. A. K. Sundaram for about 8 years. Later, he honed his skills in mridangam under Late Shri. Melakkaveri K Krishnamoorthy for about 10 years. After this, he took advanced training in muhursing under the well known and front-ranking mridangam artiste of reputed Shri. Mannargudi A Easwaran.

Although he is an accomplished mridangam artiste, he took up muhursing, which is one of the most difficult instruments to play, as his main instrument and has achieved unimaginable heights of being the most sought-after and front-ranking artiste in muhursing.

He is a full time professional muhursing artiste and is training a lot of students in this art and also in playing mridangam. He is an “A” grade artiste of AIR, Chennai, and is serving them with distinction for many years now. His playing and technique enhances the quality of the concert.